Birding our way to Kithulgala and beyond

Glad to leave Colombo even if it meant getting up at 4:30am. We had two expert birding guides pick us up with a van to start the long trek to Ceylon Tea Trails Tientsin Bungalow guest house. Very thankfully, one of them was also an expert driver. Who knew driving 70 miles could take five hours (not including the time we spent bird-watching and eating lunch!)?

The narrow, unlined, shoulder-less roads shared three lanes of traffic, left hand drive, with all vehicles free to pass in the "chicken lane" concurrently. And people are worried about flying?? It was happily not raining when we were bird-watching, which means it was raining when we were driving. This is monsoon season.

Along the way we visited a residential area on the edge of a National Park and started seeing our birds. We then drove to the other side of the mountain, crossed a swinging bridge over a river swollen with rain and silt to bird inside the park. Interestingly (or tragically) we saw a huge tree felled by local farmers...an example of how parks can exist on paper but the reality of subsistence farming takes its toll. Jack and Josh were great sports, helping us look for movement in the rainforest canopy while watching our legs for leeches. Our guide furnished gators (you can see in the photos) and the leeches were small, so, no worries!

We arrived at our bungalow just in time for High Tea, surrounded by steep mountains planted with groves of tea bushes barely hip high. This is where they've grown the good stuff since the 1850's, and it really took off after a blight killed the coffee trees. Now Sri Lanka (aka Ceylon) produces over 300,000 metric tons annually. Each bush is picked by hand once every seven days, with women toting sacks as big as they are, plucking only the two new leaves and bud.

Food is chef prepared fresh and delicious. I promise an entry soon that will be "eating out way around the world".

We are in a paradise now!

Sri Lanka - and a CONFESSION

First know, I'll take warm and humid over HOT any day! You could barely keep your eyes open in Oman, it was so hot. It was deserted, too - no one out on the streets, which was probably due as much to Ramadan as the heat.

Today we got to SLEEP LATE - a luxury on this trip. Jack and I decided to explore on foot, with my trusty CityMaps2Go app. We easily found City Hall (looks like the U.S. White House) and Cinnamon Park. Shops along the way were closed since it was Sunday. The park was nice enough, with lots of people and many workers sweeping and raking, but it maintained that slightly grubby mildewed third world vibe, nonetheless. The fountains were turned off for maintenance.

We stumbled upon a "local food" festival, sponsored in part by USAID. We didn't partake of anything, following the advice of our Austin Travel Clinic, but we appreciated the event which included Michael Jackson music over loudspeakers.

We checked out the National Museum - mostly under much needed renovation with hopefully will include air conditioning. But it was interesting to compare this country's architectural detritus... columns, capitals, reliefs, and sculptures made from sandstone in the same years that Romans were building Ephesus out of marble.

We were headed to the small lake near our hotel when we fell for the crazy "let me hail you a cab" scam... My fault for trusting the well dressed, English speaking, clean cut guy. If I had not pulled out my map the tuk-tuk driver would have taken us even further. (And no, all the streets are not one-way!!) So that put a damper on our afternoon. I'd like to think I just put his kid through school or something equally positive, but it pissed us off none-the-less.

Our dinner at The Lagoon at the Cinnamon Grand Hotel ensured our evening ended on a bright spot.

Flying the Arabian Sea and India (by Jack)

We completed the longest single flight of the trip on June 27 from Muscat, Oman to Colombo, Sri Lanka at 1,860 statute miles (1,620 nautical miles).  Most of this flight was over the Arabian Sea (part of the Indian Ocean).

Josh and I arrived at the Muscat airport at 5:00am local time (letting the ladies sleep in an extra hour) and had to re-position the plane from a remote parking spot to the “civil” ramp where we could get fuel.  Our very efficient “handler” (a company that takes care of all the paperwork and coordination at the airport) arranged for an airport vehicle the take us out to the plane which was parked among some much bigger private jets.  As we approached she pointed to our plane and told the driver to go to the “little mosquito.” Oh well, it is all relative, right?

By the time we repositioned, got fueled, and the ladies arrived and boarded it was about 6:35a local time when we departed and it was already 41C…106F very early in the morning!  Oman is a hot place.

The departure was uneventful and after a bit of negotiation the air traffic controllers accommodated our request to cruise at 28,000 feet (a non-standard altitude for flying east) which was the optimal altitude for fuel economy which we watched carefully on this maximum range flight.

Once again, the enroute weather was generally good and air was smooth.  As forecast, there was a narrow band of showers along the southwest coast of India which we made a small deviation to avoid.

One surprising thing to me was the density of the air traffic over the Arabian Sea.  Unlike Canada to the Azores where we were essentially the only plane on that general route, there were dozens and dozens of airliners flying back-and-forth between the Middle East and India/Sri Lanka. The image below shows six airliners with about 60 miles of us at one point essentially over the middle of the Arabian Sea...the numbers indicate how many hundreds of feet they were above us...

At the relatively small Colombo, Sri Lanka airport (one runway), there was even an Airbus A380 (the largest commercial airliner made) on the ramp.  Our handler in Colombo explained that many people from India and Sri Lanka travel aback-and-forth to the Middle East for work, thus, the heavy airline traffic.

Upon landing at Colombo we were met by a bevy of people including a representative of our US-based handling company that had flown in (commercially) from India just to supervise our arrival and departure.  Evidently they did not have much confidence in the local aircraft handling companies.  We re-fueled, cleared customs quickly, and were on our way to the hotel in short order.

We are in Sri Lanka for five nights which is longer than any other stop on the trip.  We will spend part of that time in the main city of Colombo and part of the time in the central mountain region.

We depart early July 2 for another long non-stop flight to Singapore.
Posted by Jack at 4:38 AM

We arrived after dark on Wednesday and the airport was practically deserted. Our "handler", a young woman with excellent English, whisked us through customs. She was not wearing an abaya or even a head scarf, but all the other women were.

On Thursday, Becky and I got up early, and met Manal, our guide (a woman!) for the Haya Water Al Ansab wetlands. It's an environmental restoration area which is packed with migrant birds during the winter, but much fewer birds during the summer. We saw plenty of things to keep us interested and I was intrigued to get a closer look at some plants and happy to know they are developing a section devoted to native plants of Oman.

Our cabbie, Salah, then took us to see The Grand Mosque. Becky and I were ushered into a room where lovely women helped us don headscarfs. The Sultan Qaboos Grand Mosque opened in 2006 and boasts massive Swarovski crystal chandeliers and a 40,000 square foot carpet woven as one continuous piece. It took hundreds of women four years to complete.

On Friday morning, Salah met us early again, and Josh joined us to explore the Al Qurm National Park - more like what we consider a major city park, not a big wilderness area. We were the only visitors since it was Friday (Muslim's Holy Day) but that made birdwatching a lot better for us.

These afternoons have consisted of staying inside with air conditioning. We dipped into the pool, touched the ocean, but it is crazy hot-like-Phoenix-plus humidity.

Weather forecast for our trip to Sri Lanka looks good.

Flying the Middle East (by Jack)

On June 24 we flew from Bodrum, Turkey to Muscat, Oman with a fuel stop in Luxor, Egypt. In other words, over the heart of the Middle East.

Sorry to report no excitement along the way…no intercepts by angry foreign fighter jets nor surface-to-air missiles screaming past us. Everything went pretty much as planned. The plane performed perfectly once again and air traffic control was generally cooperative with only occasional language difficulties (“say again…”). The weather even cooperated with clear skies and smooth air along all 2,540 statute miles (2,210 nautical miles). A long day, but safe and comfortable. 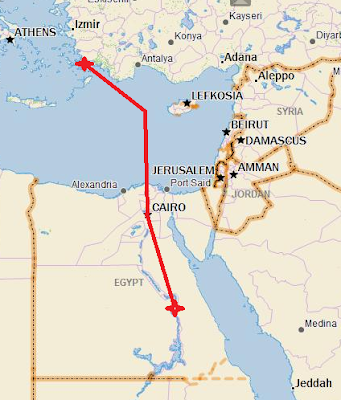 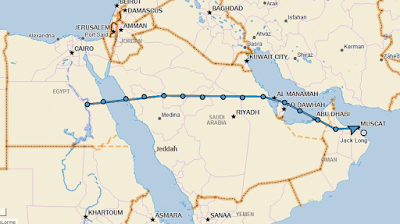 
This is what most of Egypt looked like from the air...

Approaching Luxor, Egypt…green within a few miles of the Nile River, barren sand everywhere else…

On final approach to Luxor, Egypt…not much going on there as a result of a huge reduction in tourist activity after the revolution… 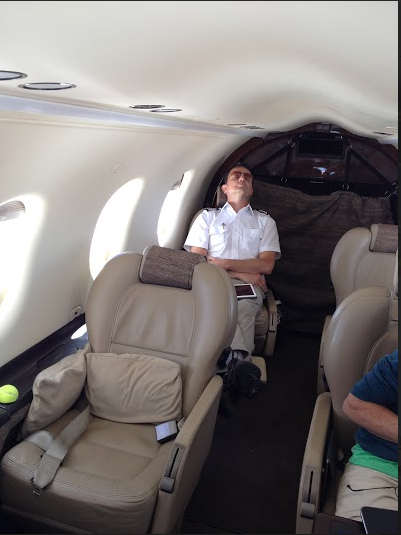 Approaching Muscat, Oman just as the sun is setting…a bit of blowing dust, but not too bad…

Next leg is the longest non-stop flight of the trip from Muscat, Oman to Colombo, Sri Lanka. We depart early Saturday morning (June 27). About 90% of that flight is over the Indian Ocean which allows us to avoid some of the less hospitable airspace in the region.